New Zealand Transit of Venus photographs from 1874 and 1882

Photographs of the personnel, camps etc. of the 19th-century expeditions to New Zealand are few and far between. Should you, gentle reader, have any in your possession, I should be most pleased to receive details and a scan at the e-mail address given at the end of this web-page.

The British sent expeditions to observe both transits. In both 1874 and 1882 their headquarters were at Burnham, near Christchurch, and the area where they set up camp is now a Historic Reserve. Over the last several months I have been searching for the glass photographic plates of the transit taken in 1874. Success came recently thanks to Jessica Ratcliff (author of the excellent The Transit of Venus Enterprise in Victorian Britain) who had plate scans provided some years ago by the UK Science and Technology Facilities Council (STFC) and was able to identify three of them as from Burnham. Two are negatives (i.e. original plates): 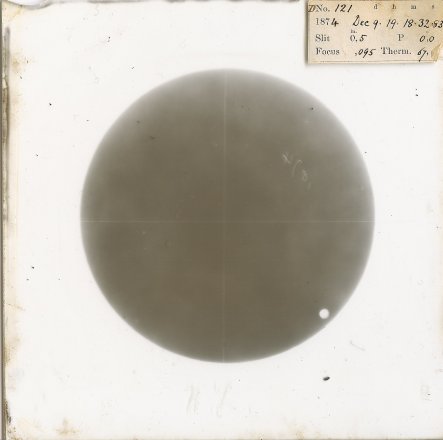 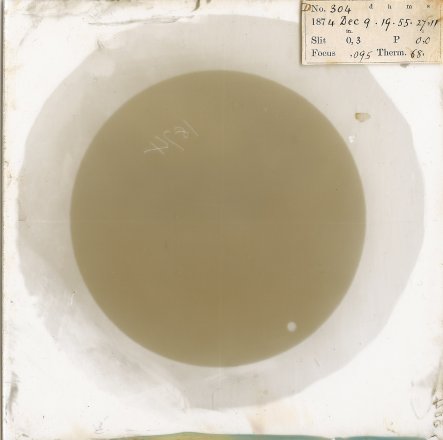 Because the plates are negatives, the bright Sun appears dark, while Venus and the sky, which are much fainter, appear bright. The plates are 6-inches square. They have been scanned with their labels in contact with the scan bed and the photographic emulsions upwards, as indicated by the mirror-reversed '1874' scratched into the emulsions. As presented here, the direction towards South is 'up' and the Sun appears much as it would have been seen in the north-western sky by a shielded eye, with Venus in front of the Sun's lower right quadrant. Venus has encroached further on to the solar disc in the second, later image. Ingredients for the photographic emulsions included egg whites and beer.

The plates are marked with the date and time of exposure. The date adopts the then astronomical convention of the day begining at local noon. The time recorded is a special astronomers' time known as local sidereal time. The equivalent modern civil date remains December 9. The corresponding New Zealand Mean Times, which was the civil time system then is use, are 14:08:37 (2:08:37 pm) and 14:45:25 (modern NZST values are 30 min greater). The transit was an afternoon affair, begining at 13:19 NZMT and ending at 17:47 NZMT.

The plates tell the story of the meagre results from Burnham in 1874. At the start of the transit it was cloudy. Just after 2 o'clock the sky had cleared, but less than 40 minutes later the sky was clouding over again--hence the bright veil of sunlit haze [i.e darker ring] around the Sun in the second image.

Click on the images for high-resolution versions, which may be used freely. Please acknowledge the UK STFC and J. Ratcliff as the source.

The special 'photoheliograph' telescope that was used to take these photographs can be seen here during trial set-up in Greenwich Park, near London, prior to departure for New Zealand. This image is preserved at the Royal Museums Greenwich. Study the Museums' Terms & Conditions, but it appears the image can be used freely for any non-commercial purpose. The same web-site houses images of one or two other instruments used in New Zealand ('Station D').

The Science & Society Picture Library, which is a commercial set-up requiring payment for most uses, includes a picture of three persons and the Station D equatorial telescope here. I have obtained a larger print, and I believe the man at the eyepiece may be Major Henry Spencer Palmer, who led the 1874 expedition to New Zealand. (Palmer's great-grandson, however, thinks his ancestor may be the man with the notebook.) It is not clear whether this picture was taken in Greenwich Park or Burnham. I hope study of the Royal Greenwich Observatory archives next time I am in the UK may resolve the issue.

In both 1874 and 1882 the British enlisted a large number of local observers. An 1874 observer in Grahamstown (i.e. Thames), presumably H.A. Severn, can be found here.

The photograph below shows Nelson observers resting after the 1882 transit.

The man at centre is amateur-astronomer Arthur Samuel Atkinson, brother of Prime Minister Harry Atkinson. To the left is his in-law Maurice W. Richmond, who called out the time during the transit and later became Professor of Law at Victoria College, Wellington. The young woman is perhaps Atkinson's middle daughter Ruth. Are the rolled-up papers in her hand an indication that she recorded the timings? Perhaps examination of the Richmond-Atkinson papers at the National Archives in Wellington will answer these questions.

Click on the image for a higher-resolution version, which may be used freely. Please acknowledge Harry H. Atkinson as the source.

See also Transit of Venus documents for outreach, especially Figues 11 & 18 and notes about the Burnham site.

Photographs of the German Expedition to the Auckland Islands in 1874 can be found at the State Library of Victoria in Melbourne. One album of photographs is the work of Hermann Krone, while the other is mostly the work of Guido Wolfram. Wolfram's album is available on-line here (then click to see child records).

The French expedition to Campbell Island in 1874 had the barest glimpse of the transit and made no observations. I have not seen any photographs from this expedition, though a heavily-illustrated publication of the natural history of the Island was published (including a geological cross-section of the Lyttelton railway tunnel).

American expeditions visited for both transits. In 1874 the observing sites were Queentown and Whangaroa Bay on Chatham Island. In 1882 observations were made from Queenstown. Photographs can be found at the Turnbull Library and here. Note the photograph of the German site, taken when the American supply ship visited Auckland Island fearing the Germans were in distress.

For a rapid introduction to transits of Venus...

...see the pages I wrote for the Royal Society's web site.

William.Tobin @ bitbucket.wanadoo.fr (Edit out spaces and "bitbucket.", which have been added to fool web crawlers.)